ICM is excited to be quoted in article about the future of airline baggage in The Wall Street Journal!

This article first appeared on The Wall Street Journal. View the original here. 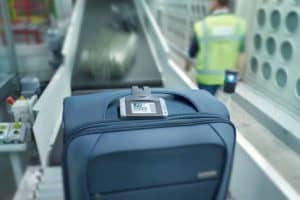 A prototype of Air France-KLM’s permanent bag tag, programmed to head to London Heathrow Airport, and attached to a bag on a belt at Amsterdam Airport Schiphol. PHOTO: ARTHUR MEBIUS/ FASTTRACK COMPANY

For decades, fliers have checked their bags the same way: hand them to an airline employee and trust that they will reappear at the destination.

Now big changes to that model are coming as airlines look to streamline the airport experience – and pass more work to customers and machines.

Their latest ideas including letting fliers tag their own bags, print luggage tags at home and track their bags on smartphones. Later this year, some fliers in Europe likely will begin using what could be the future of flying luggage: permanent bag tags that digitally update if flight plans change. Improved technology and loosened security rules are accelerating changes to baggage handling.

“It’s a bit of a baggage revolution,” said Ryan Ghee, editor of the Future Travel Experience, a website on advances in commercial flying. “Normally you have one [change in] development, but it’s all going on at once.”

The changes face hurdles, including opposition from unions, security rules and fliers who prefer a human touch. On a recent weekday at Chicago’s O’Hare International Airport, several fliers struggled to tag their bag and summoned airline employees for help.

Still, carriers are plowing ahead. More than a third of global airlines now ask fliers to tag their own bags, compared with 13% in 2009, according to SITA, an airline-technology firm. By 2018, more than three-quarters of carriers intend to offer the service.

“I don’t work for the airline. Why should I do their job?” said Mark Sam Rosenthal, a television writer from New York who prefers to check bags with ticket agents. “If something goes wrong or I have a question, the self-tagging machine isn’t going to have an answer,” he said.

From 2004 to 2014, a period in which airlines added many self-service technologies like kiosks, the number of U.S. ticket agents fell about 13.5% to roughly 138,000, according to federal estimates. U.S. airline passengers increased 8.6% to 761 million over that period.

The biggest of the coming changes is permanent bag tags, electronic devices that strap on to frequent fliers’ luggage and digitally display their flight information. The tags display bar codes like a traditional tag, allowing them to work with existing infrastructure. Fliers update the tags via Bluetooth from their smartphones, and the airline can also remotely update the tag if its owner gets rerouted.

Air-France KLM is also releasing a bag tracker that goes inside luggage. The device uses satellite data to give travelers the bag’s location and light sensors to alert them if the bag is opened en route. The carrier said advances in mobile technology allowed it to release the tag and bag tracker after years of development.

Officials expect similar technology to soon arrive in the U.S. “Home-printed and electronic bag tags are the low-hanging fruit for U.S. airlines,” said Stephanie Taylor, manager of passenger services at Airlines for America, the largest U.S. airline trade group. “We’re expecting multiple carriers to adopt these solutions by the end of the year.”

Michel Pozas Lucic, Air France-KLM’s vice president of customer innovation, said alliance partner Delta Air Lines Inc. helped develop and test its permanent tag. “We expect them…to be interested” in adopting the technology, he said, adding that other airlines are in talks to use the devices, too. “We don’t see a lot of reasons why it wouldn’t take off.”

Simpler bag-handling changes are becoming pervasive. It is now common for travelers to tag their own bags in Europe, and it is catching on in places like China, Africa and the Middle East. Kempegowda International Airport in Bengaluru, India, said it plans to deploy the country’s first self-tagging kiosks in July. About a quarter of global fliers now regularly tag their own baggage, according to a recent SITA survey.

In Europe and elsewhere, carriers use fully automated machines to accept passenger-tagged bags, meaning travelers don’t have to interact with airline employees. ICM Airport Technics, which has installed its automated bag-drop machines in airports in London and Australia, said the typical transaction takes between 15 seconds and 45 seconds. (Bolded by ICM)

Airlines for America said it is lobbying the TSA to allow a biometric identification check, such as facial-recognition software or fingerprint readers, to remove humans from the process. The TSA said it “does not currently envision changes to bag security requirements.”

Airlines also are moving to improve bag tracking ahead of a June 2018 deadline set by industry groups to install such technology. Tracking should help reduce the rate of mishandled bags world-wide, though airlines in 2014 lost 7.3 bags per 1,000 fliers, compared with 13.2 bags in 2003.

As airlines better track bags, they’re passing that information to fliers. A tenth of airlines, including Delta, let fliers track their bags in real time, according to SITA. By 2017, two-thirds of carriers intend to offer the service.

Our site uses cookies so that we may personalise your experience on the website by directing you to the material we believe will be of interest to you, as well as for security and maintenance of the website and for statistical and reporting purposes. Please click here to view our website’s